Act of Gay would like to remind all of our proud Act of Gayers out there that we have been repeatedly told that we are responsible for powerful events that occur around the world. We now own that power and we will not allow the Pope or anyone else to attempt to usurp us in that realm. So, this episode of Act of Gay is dedicate to the Pope, his current scandals, which ironically are of the gayest nature, and his visit to Brazil.

These fantastic women know what’s going on and they went straight to the Vatican to let them know.  Just in case you don’t know who they are – these are Femen.  You may remember that a while back we covered Homen, a homoerotic homophobic men’s group, well Femen are a homoerotic homo loving women’s group and Act of Gay salute them!

Just in case you didn’t understand quite how cool these women are, we thought we’d share one more gratuitous image of them because we love them.

Now, back to today’s episode.  After a week of tawdry and homolicious stories emanating from the Vatican, including our favorite about the Pope’s appointee to sort out their highly dubious finances being caught with a rent boy in an elevator, the Pope has just hit Brazil.

Brazil is a Catholic country, but it’s also a country with lots of queers.  Wonderful, boisterous queers who held a protest upon the Popely arrival.  Not just any old protest but a good ole gay and lesbian kiss in! 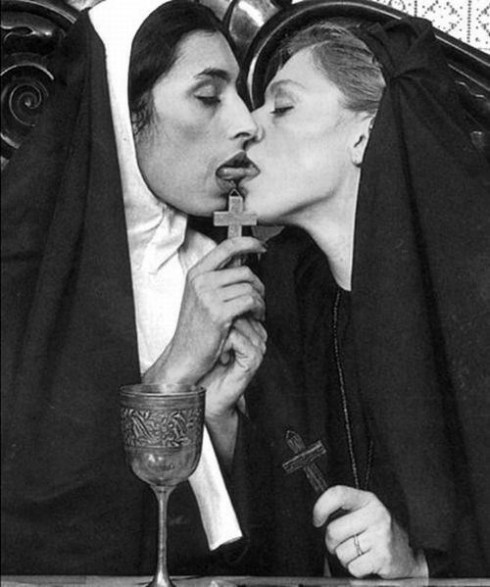 The above image is a graphic representation of what we think the kiss in may have looked like as we have no other images to show you at this point.  We feel it is an excellent representation.  Don’t you?

So the Pope not only has gays running riot around the Vatican and trouble in his bank accounts, but it appears that the queers are revolting.  Can’t imagine why.  Could it have something to do with the ongoing Catholic obsession with gay marriage.

We think that the Pope should perhaps be focusing on the sins of his own rather than on the sex lives of others.

Investigators in Rome are combing through the 19,000 accounts held by the Vatican’s bank in search of money laundering and other crimes, in a long-delayed attempt to clean up the institution’s tarnished reputation.

Washing Money at the Vatican

As Act of Gay are feeling particularly benevolent towards Brazil and its gorgeous gays, lesbians and transgendered people, let’s look at what we will bequest upon them.

Since the Pope is present and he tries to claim all miracles for himself, we thought we’d show we’re in the same league.  The only way to do that would be…well..we suppose..resurrection.  So gays, let’s give some praise and claim our own little miracle. While the parents of baby Yasmin believe that the miracle of her resurrection was something from God, we’d like to enlighten them that the gays love babies and want them all to survive and live long and happy lives and therefore the power of the gay can, indeed, bring miracles.  If we can be granted the power of tsunamis and hurricanes, we also claim the power of giving life.

Dead  Baby Risen by Miracle – Could be Act of Gay

Act of Gay were also present to prevent a tragic baby killing cow falling incident. Sadly, our miracles normally only extend to babies and animals, so we must admit that we had a minor slip up and an adult was, in fact, killed by a cow falling through his roof. Nevertheless:

In the second case, the cow just missed falling on top of a baby and a small child that were sleeping. The near-miss was described as a miracle.

Cows Fall Through Roofs in Brazil

Keeping true to our word about helping animals too, (though we do have some regrets about those cows) Act of Gay is proud to announce that we may have been responsible for Boss, the Brazilian drug sniffing dog, locating 6,919 packets of cocaine worth more than half a million US dollars this week.

So, today we’ve given you Vatican scandals, falling cows and resurrecting babies.  What more could you ever want from us?  If you have ideas, please do let us know.  While we wait, we’ll leave you with this video of the anti-Pope kiss in that was held in Brazil yesterday. Watch it and support our LGBT – and all the other letters in the alphabet – friends in Brazil. They’ve been invaded by the leader of all haters.  They need our communal Act of Gays.