Ok Act of Gayers, let’s be honest.  How many of you have ever heard of the Republic of Macedonia?  It’s likely that not many of you have.  So, first we’ll start with a little bit of geography and history. Macedonia used to be part of the country called Yugoslavia, until NATO bombed it and split the country into new countries.  None of these countries are known to be particularly nice to gays, but Macedonia has been particularly not nice recently and therefore has earned the ire of Act of Gay. 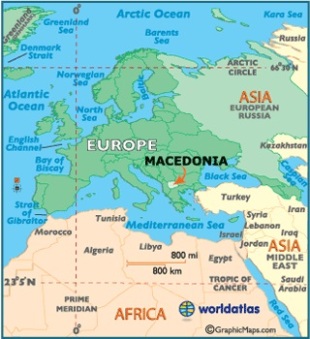 Macedonia is currently struggling to be accepted into the European Union. If a country doesn’t seem to be making any effort to be a little bit nice to their gays, why would they want that country in the EU?  Don’t get us wrong, we know that Europe isn’t close to perfect and there are plenty of countries there that haven’t always done the best for their gays, but why add something even more rotten to the stew?

Human Rights Watch has written to the Prime Minister of Macedonia to tell them to start being dear to their queers. After several worrying attacks over pride week in Macedonia with no arrests being made, Boris Dittrich from Human Rights Watch wrote:

“The police have a responsibility to protect all Macedonians, and to investigate all crimes,” Dittrich said. “The prime-minister and the other government ministers should show some political leadership by calling on all Macedonians to halt the anti-LGBTI violence and discrimination.”   “This troubling spate of anti-LGBTI attacks makes it all the more critical for the Macedonian government to take its Council of Europe commitments seriously,” Dittrich said. “The government silence after these attacks, combined with its general disregard for the basic human rights of LGBTI people, contributes to a vicious climate in which hate-filled people believe they can harass and threaten LGBTI rights defenders with impunity.”

Macedonians are giving the world the impression that they are playground bullies, recently attacking the home of a successful out gay Macedonian actor, Peter Stojkovic, in Macedonia.  But still no action from the police.

As with many of these stories, there are ironic moments.  Completely unpleasant singer, Esma Redzepova, who claims to be a human rights activist, but clearly she is particular about who she considers human, blamed – guess who?  The gays, when her Eurovision entry didn’t make the semi – finals.  Apparently, it was some sort of gay conspiracy that kept her from making it through to the finals. Or, so she claims.

The charming words of this self proclaimed human rights activist were:

“This is an outrage!  Faggots! This event has been taken over by those who run gay pride parades all over the world. I had heard it all before but that was the first time I saw with my own eyes what’s become of this wonderful music competition. No wonder we did not qualify as it is clear who goes there.”

Act of Gay would like to stop at this point and allow you, our loyal Act of Gayers, to watch a video of this woman’s entry.  We would suggest that if there truly were a gay conspiracy, she would have won gold with her woman in drag fabulousness and we do hate to admit she is gay fabulous.  But she is.

Now Macedonia that you have pointed the force of Act of Gay in your directions, we’d like to announce that Serbia no longer wants your tomatoes. So Macedonia, you may need to suck on them.

Even though you may not have a tomato shortage, the rest of your food is going up in cost. If only you had thought about being nice to the gays, maybe you wouldn’t be living on tomato soup now.

Bread’s Now Too Expensive to Eat With Your Soup

And now your women’s under 17 soccer team got thrashed by Switzerland on the same day your thugs tried to burn down the LGBT center.  What a surprise. Can’t imagine that Act of Gay weren’t watching.  Sorry girls, but until you can make out in the shower if you want to after a match without risking bullying in Macedonia, you may not score anywhere else.

Macedonia, you better buck up and love your gays. They really are a lovely bunch of people and they may just get you into Europe.